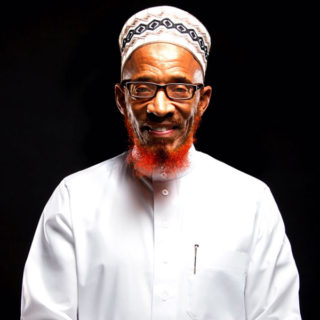 Shaykh Khalid Yasin was born in Harlem, New York and raised in Brooklyn as a Christian along with nine siblings. Although not an orphan, he was put up for adoption due to his family’s financial state and grew up in foster homes from the age of three along with some of his siblings, until he was fifteen. He describes each foster home as having a different Christian denomination, so he covered a wide spectrum of Christianity.

Yasin has described his youth in “the ghetto,” where it was “Me and my two brothers Sam and Julius, against the world. We had nothing but converting and accepting Islam now we have everything”. He felt the grief of African-American people, and he was especially influenced by the turbulent 1960’s and figures like Malcolm X.

He embraced Islam in 1965 with the late Shaykh Daud Ahmed Faisal of the Islamic Mission of America located in Brooklyn, New York. He has studied the sources of the Sunnah, the Islamic creed, jurisprudence, reading and recitation of the Qur’an, Islamic history, and the Arabic language, with several teachers and mentors. He has dedicated the last thirty-five years removing distortions and misconceptions about Islam and Muslims. He has delivered lectures in more than eighty-nine countries worldwide, resulting in over 75,000 persons embracing Islam directly from his hands, or after listening to his over one hundred and fifty recorded lectures.